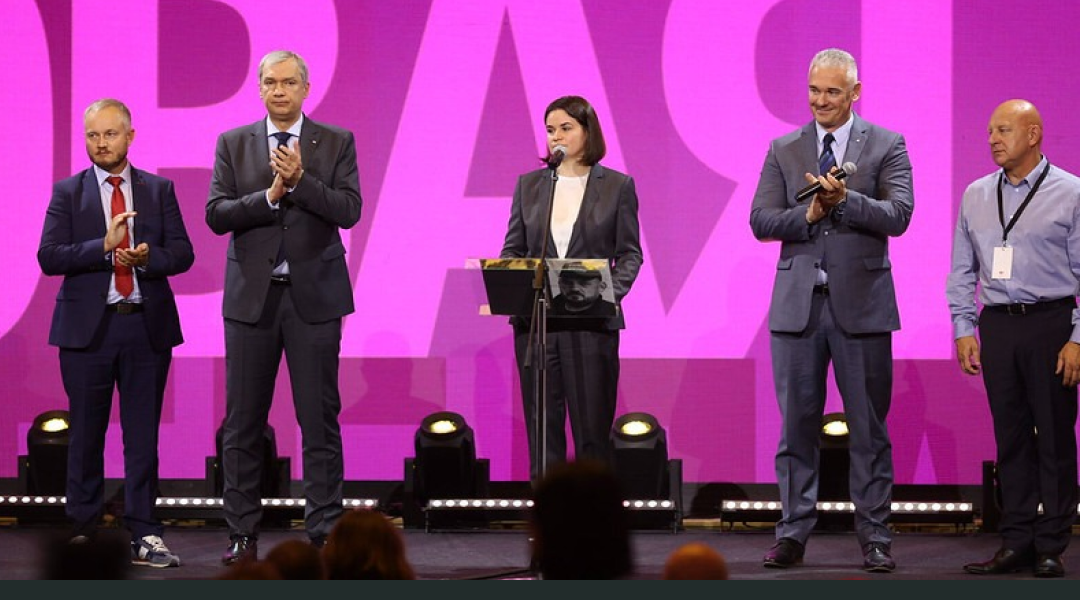 One hundred days of the United Transitional Cabinet

One hundred days following its establishment, the United Transitional Cabinet of Belarus releases a report on its track record and upcoming plans concerning goals formulated in its early days.

Why was the United Transitional Cabinet established?

Given the unprecedented brutality of the regime against the Belarusian people and the emergence of a new threat to the independence of the Belarusian state, the democratic forces of Belarus decided to establish a fundamentally new political institution, the United Transitional Cabinet, which aims to unite the democratic forces of Belarus for an adequate response to the major challenges of the time. The Cabinet focuses on two primary tasks: restoring justice in the Republic of Belarus and protecting its independence. To achieve them, on the first day after the Cabinet was created, Sviatlana Tsikhanouskaya, Head of the Cabinet, appointed Aliaksandr Azarau as Representative for the Restoration of Law and Order and Valery Sakhaschyk as Representative for Defense and National Security. The security bloc in the political structure qualitatively distinguishes the activities of the Cabinet from the previous activities of the democratic forces of Belarus.

When referring to the security bloc formed within the Cabinet, it is implied that all resources of democratic forces are pooled, enhanced, and strengthened by improved logistical support, as well an internally sourced training system is created for those engaged in restoring justice in Belarus and protecting its independence (groups for holding special operations, a system of notification, management and coordination, medical support for planned actions, etc.).

Defense of independence and restoration of legitimacy


Information about other activities, both implemented and planned as part of the security bloc’s activities, is not subject to disclosure due to the safety of the participants of these events and the specifics of their tasks.

Taking into account the high risks associated with the activities of the security bloc, the Cabinet reserves the right to abstain from disclosing detailed information about it.

International pressure on the regime and new opportunities for democratic forces

Establishing official ties with Ukraine authorities has been a priority task. The Cabinet recognizes its territorial integrity unconditionally and expresses support for its resistance to Russian aggression. To fulfill this task, Cabinet Representative for Foreign Affairs Valery Kavaleuski has made working trips to Ukraine and held several official meetings, many of which were confidential as the potential military threat from the territory of Belarus complicates the development of Ukraine’s relations with democratic Belarus. A working trip has been made with Representative for National Revival Alina Koushyk. Joint efforts enabled high-level contacts with Ukraine and agreements on future cooperation with major state and public institutions. But the most significant advance is that the Ukrainian side has recognized the importance of democratic changes in Belarus for its security and expressed interest in developing military and political relations with the democratic forces of Belarus. For this reason, the Cabinet considers this activity field promising and intends to continue working on it.

The international direction of the Cabinet’s work is essential not only for legitimizing the Cabinet itself or obtaining international support for its activities. As one of the initial goals of the Cabinet, restoration of justice is impossible without the international community involved in bringing justice, based on international law, to those responsible for repression against the Belarusian people. To this end, Representative for the Transit of Power Pavel Latushka and his team have continued the work to intensify international universal jurisdiction investigations of crimes committed by the Belarusian security forces. For instance, on October 24, an international conference on mechanisms of universal jurisdiction in European countries was organized in Warsaw. Cabinet Representative for the Restoration of Law and Order Aliaksandr Azarau joined the conference, which summarized the two-year experience of democratic forces in this direction; determined the weak points in the system of investigations and inquiries conducted in Poland, Lithuania, Germany, and the Czech Republic; and set the priorities for the near future. The Cabinet opposes the lynching of criminals but supports consistently bringing them to justice under international law.

Cabinet Representative for the Restoration of Law and Order Aliaksandr Azarau and ByPol has been making a significant contribution to future justice by gathering information about those responsible for repressions, legally defining their crimes, and publishing their investigations. It shall be noted that the Representative for the Restoration of Law and Order has been cooperating with the UN High Commissioner for Human Rights in gathering evidence of the regime’s crimes. Also, Cabinet Representative Aliaksandr Azarau and his team have been involved in gathering evidence within the framework of the criminal case for the organization of illegal migration by the Lukashenka regime. The collected information has been submitted to Lithuanian investigators.

The aforenamed initiatives have pooled their efforts and resources under the auspices of the Cabinet to facilitate closer cooperation in the new format and ensure noticeable results in the field of international justice: completion of investigations, determination of the degree of guilt of the accused, passing of court sentences, and implementation of legal punishments. Taking into account the inertia of the European legal structures in this case, the team of Representative for the Transit of Power Pavel Latushka intends to establish a permanent working group to coordinate the efforts of various initiatives in this area. The group will continue assisting Belarusians submitting applications under universal jurisdiction, which will help to build up a critical number of such applications to obtain the long-awaited results. The Cabinet intends to develop tools to enable civil society to influence the terms of conducting investigations by the prosecutor’s offices of the EU countries.

Sanction pressure on the regime remains an integral part of the Cabinet’s international work: Deputy Head of the Cabinet Pavel Latushka continues his work to promote eliminating loopholes in existing sanctions. Also, Mr. Latushka’s team, together with civil initiatives, has prepared and handed the relevant structures the information necessary for personal sanctions against the regime’s propagandists, judges, and sports officials involved in the repression of Belarusians for their political views and anti-war activities. Expanding individual sanctions is needed for further international isolation of the regime and its representatives.

Preparation of the transit period

The Cabinet needs to provide a clear image of what will happen after the regime’s dismantling and how the cabinet will prevent chaos, lawlessness, and economic crisis, which, as is known from historical experience, often accompany democratic changes. The systematic efforts the Cabinet and the strategic group of experts created to assist the Cabinet in developing the transit plan have been answering these questions. The group of experts has identified numerous challenges related to procedures for changing the political system, constitutional reform, and other issues. The response must be formulated in joint efforts with the civil society of Belarus.

Over the past period, the team of Pavel Latushka, with the active involvement of his Deputy Yury Hubarevich, has organized and launched the Personnel Reserve for new Belarus campaign, which provides for the selection and high-quality training of managerial personnel for central and local authorities for the new Belarus. As part of the campaign, a plan has been developed to replace those state apparatus employees with high-level specialists who are unqualified or have committed crimes when working for the regime. To recruit participants in the Personnel Reserve, an online platform has been created for Belarusians' application to join it. The developers have created a security system for protecting applicants' data.

All these efforts will allow the democratic forces to enter the transition period with new human resources capable of ensuring the functioning of state institutions and initiating key reforms based on the international financial support for the new Belarus that the democratic forces have gained.

The critical goals of the Cabinet are impossible without strengthening the national identity of Belarusians, forming a positive image of Belarus in the international arena through culture, and opposing the deadly propaganda of the "Russkiy mir" (Russian world) ideas. To tackle these issues, two months ago, Sviatlana Tsikhanouskaya appointed Alina Koushyk as Representative for National Revival. Over her period in office, Alina Koushyk has established working relations with major Belarusian independent cultural initiatives and the expert community in the field of culture and education, both outside and inside Belarus. Establishing contacts at the level of state ministries with crucial partners of Belarus is essential for fulfilling the set tasks. The key partners so far include the Czech Republic, Poland, Ukraine, and Lithuania as culturally and mentally close to Belarus and have formed their own national identity while resisting the aggressive influence of neighboring countries. As part of the activities to develop a national identity, a census of cultural initiatives was carried out by the Representative for National Revival. The information was passed to the developers of Digital Belarus, which intends to use modern technologies to optimize cooperation in culture and cultural processes. Alina Koushyk has contributed to the legitimization of the Cabinet by establishing relations with the Rada of the Belarusian Democratic Republic (Rada BNR), whose heraldic commission will cooperate with the Cabinet in the creation of symbols and awards of the new Belarus. In constant contact, the Rada BNR members and Cabinet representatives have found a common approach to the historical perspective of Belarus. After democratic reforms and liberation from occupation, Belarus should become the successor of the historical tradition of the Belarusian Democratic Republic.

In conclusion, it shall be noted that the Cabinet was formed in exceptional historical circumstances. It is not a typical government that, after being appointed, starts to perform its function. The Cabinet does not have a branched state apparatus and cannot tap into dedicated funds from the national budget. In current conditions, the Cabinet needs to obtain resources for its full functioning, which is also part of its work. As the Cabinet was created at the request of the Belarusian society to unite democratic forces and form a security component, the Cabinet may only achieve its global goals when the Belarusian society, democratic forces, business, and the entire civil society are actively involved. Only the pooling of efforts and resources, mutual search for agreement and overcoming misunderstandings, and joint efforts on defined priorities may produce the final and long-awaited result: the liberation of Belarus from the regime and occupation forces, restoration of legality, and economic well-being of citizens. Restoration of independence and liberation of Belarus is the duty and task of every citizen of the country. The Cabinet continues to work on this objective, relying on the Belarusian people and considering their expectations. The Cabinet is sincerely grateful to all activists, civil society, independent media, and teams of representatives who have joined this cause and continue our common struggle for change.

Over the next six months, the Cabinet intends to: