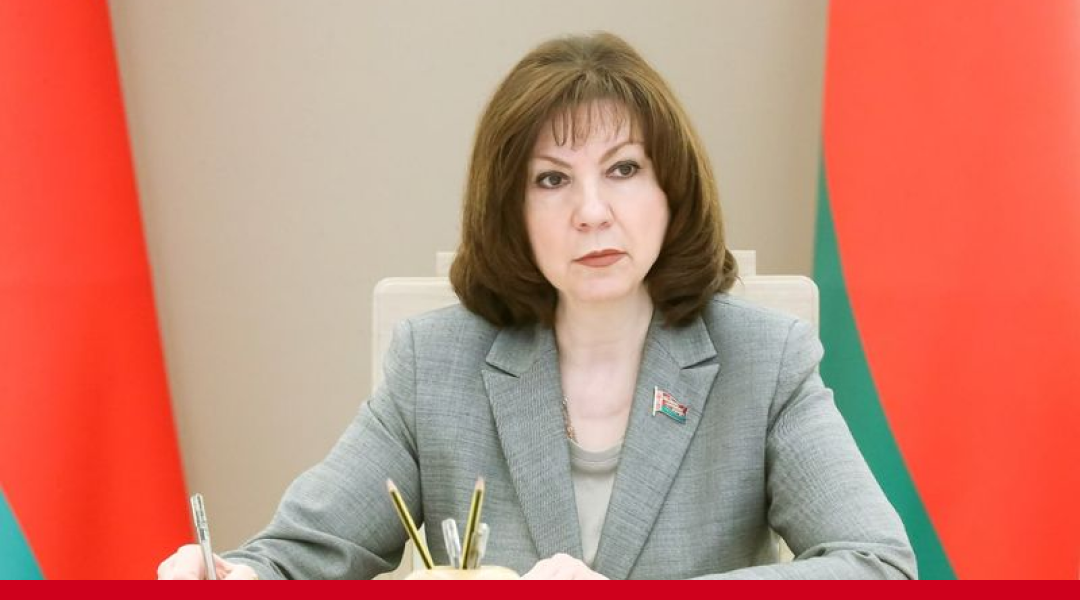 Recently we have been dealing with a possible scenario of the transit of power from the illegitimate Gauleiter Lukashenko to one of the key functionaries of the regime’s vertical — Chairwoman of the Council of the Republic Natalia Kochanova.

Let us continue the topic by answering the question why this figure can be of interest to Lukashenko’s masters in the Kremlin and be a "joker" up the sleeve of Russian occupiers, necessary to carry out — or, to be more exact, to complete — the annexation of Belarus.

To begin with, on formal grounds Lukashenko himself is not suitable for this role because of his illegitimacy. Even as a controlled puppet and obedient executor of the will of the Kremlin — which became absolutely obvious with the outbreak of war, when he voluntarily let Russian troops into Belarus to attack Ukraine and lost control over the territory of Belarus, which is used freely and without Lukashenko’s approval by the Russian military.

Furthermore, he has effectively placed military leadership in the hands of the Kremlin — and the creation of the so-called joint regional grouping, commanded by Russian generals, is further evidence of this.

Nevertheless, despite Russia’s de-facto occupation of our country, Belarus formally retains its statehood, independence and sovereignty, since to eliminate them Russia needs to commit a non-violent annexation of Belarus — that is, to legally incorporate our Republic into its federation in one way or another.

We are talking specifically about the non-violent route — as any other would completely rule out any chance of such a takeover being recognised. And also, obviously, powerful new sanctions.
And in this way Lukashenko is a problem.

No, we are not inclined to support speculations about Lukashenko’s commitment to independence and sovereignty — the preservation of which is a guarantee of his power. The legend of the "guarantor of sovereignty" could have been believed earlier, before Lukashenko voluntarily became a Russian gauleiter and allowed the occupation of our country — in exchange for Russian support, which allowed him to remain nominally in power after the events of 2020.

But it was then, in 2020, that Russia’s plans to annex Belarus failed; it was forced to postpone them, implementing only a plan for occupation. Why?

It’s simple. It’s about the status of Lukashenko himself. Most countries did not recognise the results of the 2020 elections, which put an end to Lukashenko’s legitimacy — and at the same time to the legitimacy of any of his decisions, including his ability to finally surrender Belarusian sovereignty in favour of Russia.

In fact, we can state that the Belarusians, who massively opposed the official election results in 2020, by not recognising Lukashenko as president and not allowing him to be legitimised, saved Belarus' independence. They saved Belarus as a state. The civilized world, in its turn, supported the Belarusians and denied Lukashenko any external legitimacy and recognition.

Yes, it is not the first time when elections in Belarus have not been recognized at the international level because of mass violations and falsifications. Not the first time that Belarusian society reacted with protests. However, in 2020, for the first time, we managed not only to prove mass falsifications, but to win the election of a single candidate from the opposition.

And also the creation of alternative political institutions, which were subsequently recognised by our international partners. Establishment of the United Transitional Cabinet after the occupation of Belarus also has as its primary objective the preservation of its independence and sovereignty and prevention of its annexation by the Russian Federation.

All this makes any attempt to incorporate Belarus and any decision by Lukashenko in this direction legally null and void — thanks to the will of the majority of Belarusians in the summer of 2020 and our struggle for freedom and independence, which continues to this day.

"Voluntary" and "beautiful" anschluss of Belarus, which Russia is counting on, is impossible from the point of view of international law in such conditions. This is a tremendous achievement for us, the Belarusians. But this does not mean that Russia is ready to abandon its plans and be content with only being able to keep Lukashenko’s puppet government in power in Belarus for the time being.

Given his de facto new status — that of illegitimate gauleiter — the Kremlin clearly sees the need to replace one puppet with another. Not as toxic as Lukashenko and whose "legitimacy" would be of less concern to the West. And who would allow Russia to "legally" close the gestalt of anschlussing Belarus.

As such puppet and "successor" of Lukashenko the Kremlin may see Natalia Kochanova, the chairman of the Council of the Republic. The Kremlin has already demonstrated its disposition towards her to the full extent. It is enough to remember how Kochanova was received during her last visit to Moscow.

The so-called new constitution spells out scenarios in which power may fall into her hands — either Lukashenko’s incapacity or his demise. In these cases, the presidency temporarily passes to the chairman of the Council of the Republic or to the Soviets, but also under the chairmanship of Kochanova.

But the transit of power through presidential elections — including early ones — in which she may participate instead of Lukashenko cannot be ruled out. For Russia such a scenario would be the "cleanest" - and it is naive to say that Lukashenko would never agree to it. After all, this man values only his personal security more than power. And creating a threat to it for the Kremlin would not be a big problem.

When can these elections be organised?

Taking into account the predictably bad situation for the Russian Federation on the front — I think that there are almost no doubters about the inevitable victory of Ukraine even in the Kremlin — the Kremlin must proceed to the annexation of Belarus as soon as possible. The nearest "window of opportunity" is the Single Voting Day in 2024, to which the presidential election can be added.

I am convinced that there is a direct connection between the dynamics of these processes and the situation on the front. We have said more than once — Russia hoped to devour Ukraine as the main dish and leave Belarus for dessert. But having bared its teeth in Ukraine, the Kremlin will speed up the process of absorbing Belarus — and thus the process of replacing Lukashenko. Including through direct involvement of Belarus in the war, which will make the Gauleiter a scapegoat in the eyes of the nomenklatura, the military and, most importantly, the Belarusian people. And it will make it easier for the Kremlin and its "jokers" inside the regime to justify the necessity of replacing the Gauleiter with a new figure.

Lukashenko is a worked-out material, who has already fulfilled his "historic mission": to implement a plan to Russify Belarus, occupy it and turn it into a military springboard and prepare the annexation of our country for 30 years. This "mission" of Lukashenko is coming to an end — and he has nothing more to offer the Kremlin except a direct entry of Belarus into the war — the "last march" of the Gauleiter. This, however, does not depend on him any more.

Therefore Lukashenko actively begs for more "payoffs" as the last resort — understandably, to his family pocket — including at a recent meeting with Mezentsev, the secretary of state of the so-called Union State. Where he stated that the financing of integration programmes — especially of import substitution, especially of the military-industrial complex, the income from which goes straight into the pocket of the Lukashenko family — not only must not be stopped, but must be increased.

This is his price for entering the war and surrendering Belarus to Russia. After which the "Jack" will retire, and the Kremlin can put its "jokers" into action — Volfovich and the court generals and Natalia Kochanova as the main candidate to replace the perfected Lukashenko.

But will anyone vote for Kochanova, if it is decided to bring her to power through elections?

Here it is important to understand the environment in which they will take place. The Kremlin is definitely staking on the years of cleansing of civil society, terror and repression. And if by that time the regime of the outgoing Lukashenko, who is responsible for their implementation, will still exist, the bet on these elections will be made on fear, depoliticization and minimal turnout — in the absence of alternative, nationally oriented candidates, not counting spoiler candidates.

In this scenario, it will be an even more amorphous 'election' than in 2015. And Kochanova may have every chance of slipping through — with fraud, of course, but with a downtrodden society that can turn a blind eye.

Kachanova’s convenience for the Kremlin lies primarily in the fact that, unlike Lukashenko, she can be "bought" in the West as a compromise figure — especially in the new election scenario. Also important are the patriarchal attitudes characteristic of Russians — a 'weak woman' who will be more obedient and compliant than the capricious Lukashenko, and whose lust for power will not be a problem. At the same time, brought up in the same Soviet attitudes and Russian-world mentality.

Sexism aside, it is worth admitting that on the whole Kochanova’s persona fits the Kremlin’s expectations. She is indeed a classic Soviet nomenklatura and adept of the "Russian world" - ideologically correct and absolutely not nationally-oriented, fanatical and unquestioning "Komsomol".

The danger of such a character in power is obvious. Kochanova as the "head of the state" is an instrument of the final abolition of Belarusian sovereignty, a tool of "voluntary annexation", on which the Kremlin is counting.

How to prevent it?

The first and most obvious answer is to liquidate the Lukashenko regime before the Kremlin does. And to ensure the withdrawal of Russian troops from Belarus. This can be done through a strategy of three fists:


Before liquidation, it is important to neutralise the regime politically by seeking official recognition of the United Transitional Cabinet as a transit government. We should also be ready to take power in Belarus and ensure the functioning of the state during the transition period, for which purpose the "Personnel Reserve" programme has been launched, with Yuri Gubarevich, the deputy Cabinet representative for transit, in charge.

This is the main scenario, the most obvious trigger for implementation of which is a re-invasion of Ukraine from the territory of Belarus.

Another window of opportunity and a chance to fail the Kremlin’s plans, oddly enough, is given by Russia itself. After all, to implement its "clean" plan to annex Belarus through the transfer of power to the "joker", it must itself withdraw its troops from Belarus. Otherwise, such transit, even through "elections", will not be recognized by anybody and will be certainly perceived as violent annexation and aggression. And the new "puppet" of the Kremlin will be as illegitimate as the old one.

Of course, we must also consider the Kremlin’s "dirty" scenario of violent annexation. Unfortunately, we cannot regard such a development as improbable — we can see from the example of Ukraine what the Kremlin is prepared to do to realise its imperial ambitions.

But in any of the possible scenarios we must understand the main thing. Having defended Belarus' independence in 2020, we have given ourselves a chance to preserve it as a state. However, the very battle for a sovereign Belarus, free from dictatorship and pretensions of the Russian invaders, is yet to come. And we must be ready for it.

We must be ready to play our cards right. So that neither Kochanova nor any other Kremlin "joker" leaves us a fool. Without a country and without a state.
Discuss in social networks:
Facebook | Instagram | Telegram | Twitter
Pavel Latushka