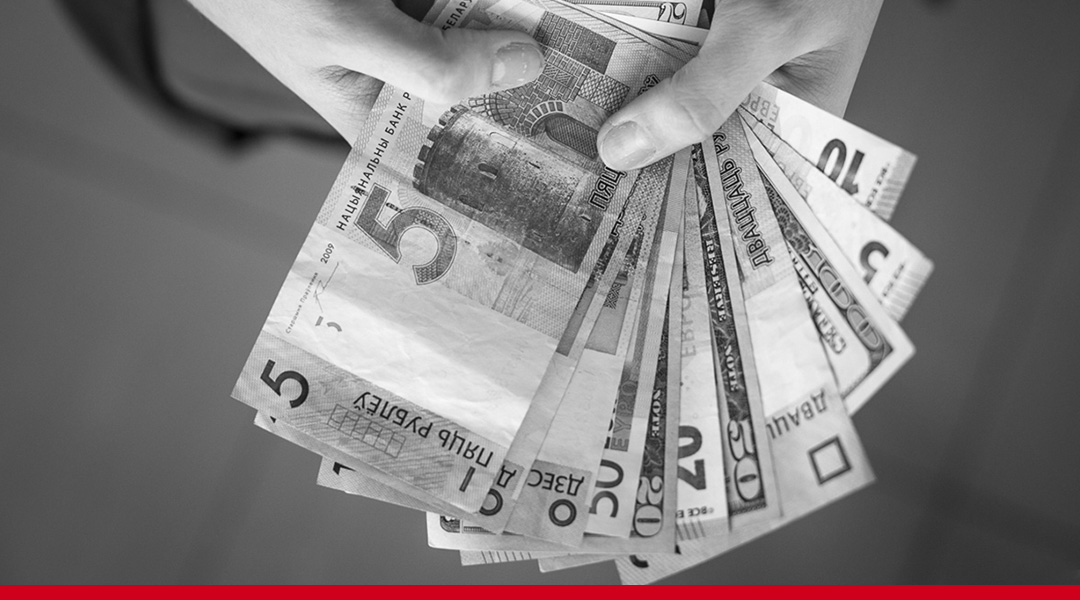 How the regime "earns" millions from repressions against Belarusians

By launching an unprecedented crackdown on the Belarusian people, the dictatorship is trying not only to retain power despite having lost the election, but to make some extra money at the same time.

Fines in the millions of rubles in politically motivated cases are the most obvious, but far from the only way the regime is replenishing its fast-draining coffers as part of the terror it has unleashed. The Belarusians are required to pay for their detention on illegally awarded prison terms. The dictatorship saves by firing them from state-owned enterprises and budgetary structures and by expelling them from universities. It expropriates businesses and confiscated property.

Read more about how the regime profits from the suffering of people who simply want to live in a free country where the law works and rights are respected below.

According to the Human Rights Centre "Viasna", Belarusians have been awarded fines in politically motivated administrative cases alone:


"Viasna" has incomplete information and the real figures could be many times higher. The regime hides data on administrative penalties. And, of course, the repression in Belarus began even before the elections were stolen from the people.

This is largely due to the increased amount of fines from 1 March 2021.

Violation of a procedure for organising or holding a mass event:

Violation of the procedure for organising or holding a mass event, repeatedly within 1 year:

Disobeying a lawful order or demand of an officer:

In addition, there are new "political" articles in the CAO, such as:
Illegal use and manufacture of flags, pennants, posters, emblems and symbols
For individuals: up to 20 b.u. (580 roubles)
For individual entrepreneurs: up to 40 b.u. (1,160 roubles)
For legal entities: up to 60 b.u. (1,740 roubles)

Involvement of minors in an unauthorised mass event: up to 30 b.u. (870 roubles)

And here are just some examples of the inadequate fines the regime has awarded recently:

Huge compensation for contrived crimes can also be added here. The Statkevich Group, for example, is being sued for more than 3 million roubles, while Sergei Tikhanovsky is being demanded to pay income tax on the $ 900,000 he allegedly owned.

The regime not only illegally awards prison terms to Belarusians, but also demands payment for serving them: 11.25 roubles per day. Meals (and often their actual absence) reportedly cost 4.7 roubles per day. Given its quality, overcrowded cells, lack of water and bed linen, we are sure that the regime remains at a significant disadvantage here.

Around 3,000 people who had been dismissed for political reasons applied to solidarity funds for help. In practice, however, the number of people who have lost their jobs due to repression is many times greater. Firing an employee in a successful company means a financial loss. But in the case of loss-making state-owned enterprises, whose number is growing rapidly, and non-profit budgetary organisations, it is a direct saving on salaries and contributions.

A worker dismissed "for politics" is not only a saving on salaries and contributions. "Thanks" to the dismissals, the base of so-called "deadbeats" who will be forced to payhigher rates for utilities, bringing additional income to the regime, is enlarged.

By the way, in January-April 2021, the net outflow of personnel from the country’s large and medium-sized enterprises alone amounted to 24,200 people.

The *Honest People estimates that by early May at least 243 students had been expelled from universities "for politics". The number of those who studied for free is unknown, but somehow that’s tens, maybe hundreds of thousands of dollars in savings on their tuition. And those expelled, as well as those dismissed, can also be written off as "slackers". Depriving young people of an education is a huge loss to the economy in the long run. But, as you know, the regime is only used to thinking about its own future.

According to "Nasha Niva", at least 335 Belarusian businesses and companies have been subjected to economic repression. It is obvious that in practice, the number is much higher. In many cases businesses have been fined for frivolous reasons or even confiscated to the state. Property is also confiscated from private individuals. This is a lot of money, which has in fact been criminally extracted by the dictatorship.

Not paying fines and evading penalties becomes dangerous under the current repressive regime. But you can:
1) Postpone paying fines to the last day.
2) Do not keep money in banks and on cards so that it is not expropriated through the Automated Information System for the Enforcement of Monetary Obligations, including by mistake.
3) Appeal against unjust verdicts — this is sometimes possible even in a legal default.

But only our common victory will stop both repression and arbitrariness.

P. S. "Earnings" from repression go, among other things, to further fund new repressions. The only way to break this vicious circle is to fight to victory.
Discuss in social networks:
Facebook | Instagram | Telegram | Twitter
National Anti-Crisis Management